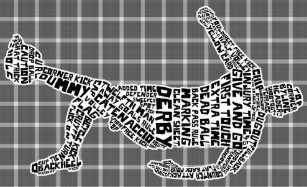 Few things are more important to learning than vocabulary. To have a word for something allows you to conceive of it, to perceive it, and to grow your knowledge of it in discussion with others.

An example: Let’s assume that a story about the Inuit–that they have fifty words for snow–is true.

This means they don’t just see the same snow we see but that they perceive and can contrast fifty gradations of what we see as one thing. Dry, light snow is a different thing from wet, heavy snow.  Wind-driven snow is different from drifting snow.  They see the world more precisely and can make decisions more precisely–how they dress and prepare for “snow” say. Their tactics in winter are far more advanced–as are their conversations–because their better, more precise vocabulary conjures more nuanced understanding into being.

Now consider your soccer club: How much does vocabulary aid–or hinder–whether players see things precisely and analytically? Does everyone have the words to help them differentiate and understand decisions on the field the same way. If they don’t all use the same word for something, for example, it’s very hard to talk about it reliably.

This applies to both tactics and technique: If they don’t have a phrase like side-on or half-turn for receiving a ball at a 90 degrees to its direction of travel, players will be far less likely to do it themselves intentionally–the thing doesn’t exist yet for them. They will be less likely to see other players do it and therefore study it and learn about it as they watch.  Their coaches will not have an efficient way to make reference to it quickly during coaching moments*.

It’s not just the skill or the idea that matters. It’s having a name for it.

Or consider: when you shout “Press!” or “Higher!” during a game: Does everyone know what you mean? Do they define that term the same way? The principle of pressing is coordinated action. A misunderstanding of what we mean exactly is deadly. But clubs routinely leave the definition of concepts like this to chance.

I was discussing this topic recently with a top coach, James Beeston. He’s a youth coach and trainer, and a former college coach who played at Siena College and in Port Vale’s academy in the UK. We jibed on the concept and agreed that clubs should have shared terminology- basically a club-wide vocabulary list to make sure key ideas get defined in the right way and are reliably understood by everybody. Just making sure that the U12 and U14 coach don’t use a different term for the same idea is a big deal.

James offered to take a shot at building a Model Vocabulary List, something a club could use and adapt to guide it’s own efforts to develop its own set of shared vocabulary.

If it were me I’d make it the expectation that players memorize the terms and that coaches to use them consistently when coaching.

Here’s what James put together: It’s really smart and here are a few things I really like.

4) Despite all this, he kept the list manageable in size.

“Check your Shoulders” – To look to see what is behind you before you receive the ball.

“Create Space” – To move to separate from defenders in order to receive a pass.

“Check away/check to” – To make a specific series of movements before receiving a ball. Usually to 1) “check away” to create space, and 2) “check to,” moving back towards the ball into the space just occupied.

“Pressure” – An area where defenders have numerical or tactical advantage and make possession difficult. The goal is usually to avoid playing back into pressure after receiving a ball.

“Numbers up” (or just “Numbers”): A time or place where a team has a numerical advantage. We want the ball in these situations.

“Back foot”/“front foot” – The foot closest to or farthest from the ball; referring to which foot a player receives a pass with.

“First time” or “One touch” – To pass or shoot on the first touch.

“One-Two” or “Wall Pass” – First time pass back to the player who has just passed it to you.

“Pass to feet/Pass to space” A pass made to where the receiving player is standing or ahead of him/her (i.e. a lead pass)  ahead of a receiver

“Shape” -Cue for a team to get into their planned formation

“Show Wide” – Communication from the teammate of a pressuring player, instructing him to make the opposition take the ball wide

“Show Centrally” – Communication from the teammate of a pressuring player, instructing him to make the opposition take the ball wide

“Recover” – Cue for a player to run back towards their own goal (to the front post!) and get behind or challenge the ball

or defending to attacking)

“Reverse pass” – A pass that goes against the “run of play”

a pass or touch

“Up, back, through” – Passing pattern used to unbalance opposition

“Line of confrontation” – A teams first line of engagement when defending

the pitch in order to limit the amount of space the opposition has in behind.

receiver) should run to support the receiver.

a winger to come inside instead of wide).

Get back in position (usually done in transition – counter attack).

“Behind the ball”–Cue to get between the ball and your own goal.

In addition to sharing it we’re eager for your comments and suggestions. It’s a draft… it’s imperfect… and the perfect example would be different for every club.  But I think it’s a really promising model for a simple tool clubs could use to more efficiently help young players understand the game.

*Cognitive Load Theory tells us that students can only process so much information at once. If you are explaining first that you need to be at 90 degrees to the path of the ball and then the you should receive with the outside of your foot and then want to discuss where to play the next touch, that’s simple to much. Only when you can say, “Ok receive side-on. ow what?” and your players grasp the concept instantly can you discuss the next step.